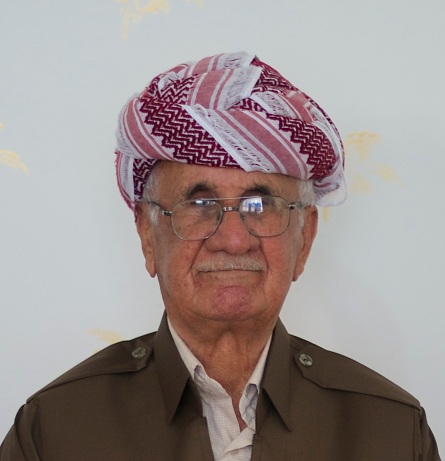 Kazim was born in 1930 in the village of Shanidar in the central mountains of Kurdistan, famous for the discovery of Neolithic remains found deep in a wide cave that slashes the hillside above. He was born into an uneducated, farming family; part of the Sherwani tribe. The Sherwanis were part of a wider group called the Barzanis, the clan who have led the Iraqi Kurdish liberation movement for most of the last century.

Kazim’s childhood was characterized by unrest, as the authorities cracked down on the restive Barzani clan and their associates, and in 1935, Kazim’s entire family was arrested.

In 1945 Kazim travelled to Iran, to where many Iraqi Kurds had fled. There he took part in the first, experimental, pan-national Kurdish state – the Mahadabad Repbublic. Tribal rivalry and a treacherous deal between Russia and Iran soon led to the collapse of Mahadabad. Faced with persecution in both Iran and Iraq, Mullah Mustafa Barzani, head of Mahadabad’s armed forces, decided to take his soldiers to the Soviet Union rather than surrender to either enemy.

In 1947, with only an AK47 slung over his back, Kazim, now aged 17, marched with Mullah Mustafa and nearly 500 men for 62 days, as they zig-zagged in and out of Iran, Iraq and Turkey, fighting 9 battles along the way with government forces from all sides.

Kazim displays a photo of him receiving a medal for his services to Kurdistan. He sits with the son of a friend who accompanied him on the trek and only recently died. They sit on the floor of the house’s living room, decorated only with a beautiful carpet and a TV. His wife plies us with tea and fruit throughout the interview.

They travelled mostly by night, often crawling on all fours, and because villagers were scared of them they rarely had enough food to eat or anywhere to sleep other than the rough mountainside. The sick were carried on the few remaining horses. By the time they reached the Soviet Union they had lost around 28 men in battle and 20 more to exhaustion or other wounds.

Once in Russia, Stalin split the group up and spread them out around the Soviet Union, to prevent any attempts to reform a Kurdish State. Mullah Mustafa and the rest eventually returned to Iraq in 1958, many with Russian wives.

Kazim remained a peshmerga all his life, fighting alongside the Barzanis. Now he lives a simple life in a small, unelaborate house in the town of Salahhadin, on the mountain of Masif, behind the Iraqi Kurdish capital city of Erbil.

Kazim wears the traditional dress of Kurdish men, with a headscarf in the style of the Barzani tribe. You will see President Massoud Barzani (son of Mullah Mustafa) wearing the same.