Working on the #buyablanket campaign with Rise Foundation I became quite frustrated that I couldn’t just use the word ‘refugee’ to describe people who fled violence in Iraq to the Kurdish north of the country. Everybody understands what it means to seek refuge from fear of persecution and violence, but I felt that people would just be flummoxed by ‘IDP’ – a bland, unevocative acronym. I began to look into it and discovered that the distinction is far deeper and the implications more wide-reaching than just semantics.

Spot the difference: IDPs or refugees?

– An IDP (Internally Displaced Person) is somebody forced to flee their home to another part of their own country.

– A refugee is somebody forced to flee their home and seek refuge in another country.

According to the 1951 Convention on Human Rights, a refugee is somebody who…

“owing to well-founded fear of being persecuted for reasons of race, religion, nationality, membership of a particular social group or political opinion, is outside the country of his nationality and is unable…to return to it.”

An IDP is… well, an IDP has no status in international law. They have the same human rights as any other person in the world, and as civilians they are theoretically protected in armed conflict, but the United Nations High Commissioner for Refugees (UNHCR) has no responsibility for them, and no other nation or international body is required to assist them.

While IDPs make up almost two thirds of global populations seeking safety from armed conflict and violence, they have far fewer rights than refugees.

Map of global internal displacement as of 2012. Click picture to enlarge.

So who looks out for IDPs? According to the United Nations (UN), respect for sovereignty is paramount, and as such

“It is the Governments of the states where internally displaced persons are found that have the primary responsibility for their assistance and protection. The international community’s role is complementary.”

Well that sounds fair enough – governments need to be held accountable for the protection of their own citizens, no matter where they choose to live. Theoretically, yes, but many of the countries where people are forced from their homes because of armed conflict, are not in a position to adequately support mass movements of people. Not only that, but many of these countries are in varying degrees of internal conflict, and the government may not be willing or able to protect certain sections of society. In some countries it may not even be clear who the government actually are.

Official boundary of the semi-autonomous Kurdistan Region of Iraq.

How does this affect Iraq? I thought it was a functioning democracy? Yes, it is. On paper. But in reality it is in a state of near-civil war. The politics will be explained in a separate post, but in essence you have Sunni and Shi’a Arabs fighting for power in the main body of Iraq, and the Kurds quietly setting up their own country-in-waiting in the north.

The Kurdistan Region has its own government and security forces and operates virtually as a separate country. This means that it is largely protected from the violence of the rest of Iraq. This is also the reason that many of the minorities persecuted by Daesh (ISIS) have sought refuge there.

So shouldn’t the government in Baghdad just send more money up to the Kurdistan region now that more people are living there? That’s what should happen. But there’s a long-running dispute between Baghdad and the Kurdistan Regional Government (KRG), so they are not helping out in any substantial way.

UN report on the influx of refugees up to late August 2014. The situation has continued to worsen. A note on numbers: The UN counts family units and then estimates them at 6 people per family. In reality many families in this region are far larger.

So what’s the situation for IDPs in the Kurdistan Region? Dire. The local government and ordinary Kurds have been going all out to help IDPs arriving in their region, but the numbers are just too great. In Dohuk province – the area closest to the most troubled area of Iraq, they have now more than 800,000 IDPs, plus at least 200,000 Syrian refugees.

Most of the IDPs arrived in June-August 2014, particularly those fleeing the conflict in Shingar. Since the normal population of Dohuk is only around 1.3 million, that’s nearly double the amount of people now surviving off the same resources as last year. Imagine the whole population of Virginia turning up in North Carolina over two months, or every citizen of Scotland moving to East Anglia in a month. What if they all turned up with nothing but the clothes they stood up in? How would that affect the lives of ordinary people?

I can tell you because I’ve seen Dohuk first hand. Normal life has stopped; children cannot go to school because IDPs are living in them all; hospitals are running out of resources; building work has ceased as IDPs live in all the building sites. These are just a few of the areas of impact. And yet the international community has no obligation to help.

Some international and government agencies are doing so, but the only ones acting with any urgency are the locally-based NGOs. I feel a separate blog post coming on about my experiences of NGOs in Iraq, so I’ll end by saying that if you want to help, I recommend visiting www.rise-foundation.org/buyablanket, which at least tackles the most urgent issue of how these people are going to survive a harsh winter in the northern mountains of Iraqi Kurdistan.

– For a sense of the living conditions for the IDPs, read my last blog post on Yezidi girl Mariam and her family.

– For facts and figures on Iraq’s IDPs and other people in need, see this very clear, one page UN report IRQ_snapshot_en_141014. 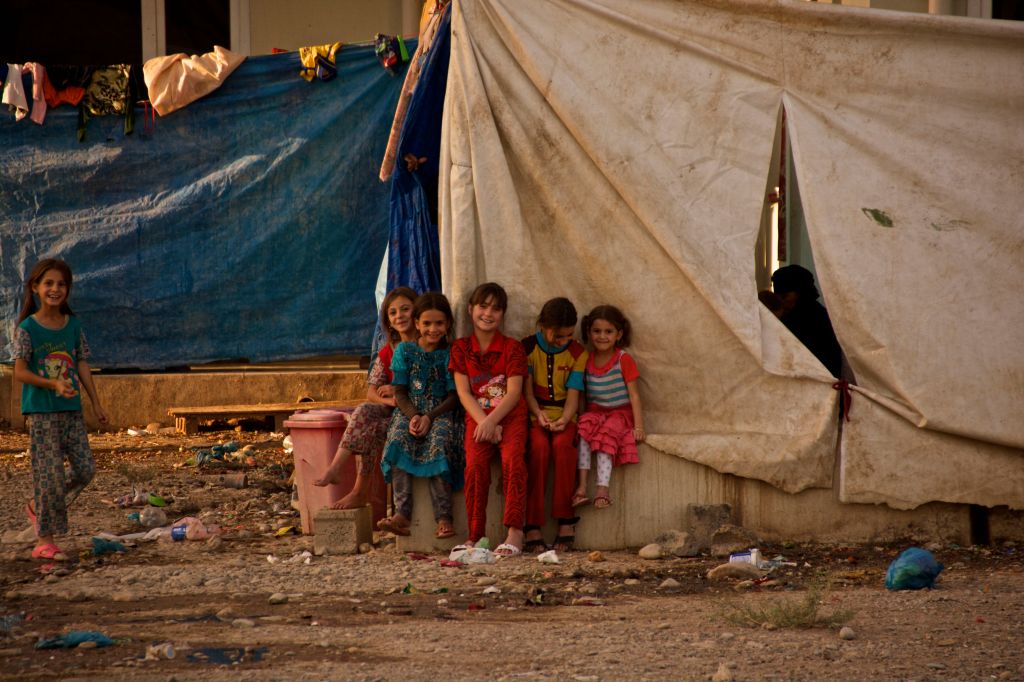 One thought on “What’s the difference between an IDP and a refugee?”